What Is Inflation and How Do You Protect Your Money?

by Money Monarch
in Investing
0
This article may contain references to products from one or more of our advertisers. We may receive compensation when you click on links to those products. For an explanation of our Advertising Policy, visit this page.
0
SHARES
228
VIEWS
Share on FacebookShare on Twitter

What Is Inflation? Here Is What You Need To Know

The Ancient Greek philosopher Heraclitus once said “change is the only constant in life”.

Although he was most likely talking from a general “moving through life” perspective, he probably didn’t realize his statement also applies to the value of money.

See, that dollar bill in your pocket won’t be worth the same amount of money tomorrow; it’ll lose a tiny bit of it’s value due to an economic phenomenon known as inflation.

If you’ve been in any economics class, you probably know inflation as the thing that causes money to lose it’s value over time.

Inflation is the reason why a quarter could buy you a gallon of gas back in the 1950s, but that same quarter could only buy you about 10% of the same gallon today.

How Does Inflation Work?

There are a few factors that could contribute to inflation.

Today, many countries have central banks that help keep the economy stable by managing the government monetary policy. Among other responsibilities, central banks control how big an economy’s money supply is.

In other words, they can inject or withdraw money from circulation as needed to keep the economy running smoothly.

Problems begin, however, when the central bank puts too much money in the economy.

You see, the laws of supply and demand apply to money the same way as they apply to everything else. When there’s more money in the economy, it becomes less valuable as it’s easier to acquire.

Due to the larger amounts of money available to earn, consumers naturally spend more money.

In turn, companies drive up prices to take advantage of this new demand.

In essence, one of the dominant theories of inflation states that a higher supply of money leads to a lower demand for money; aka each dollar holds less value to everyone in the economy.

As they buy those goods and services en masse, prices increase to compensate.

In theory, there aren’t any more physical dollar bills in the economy; sky-high demand is just making each dollar less valuable.

This is one of the primary reasons central banks exist in the first place: to maintain a sustainable rate of economic growth.

As our society becomes more advanced and standards of living rise, many objects that were usually only afforded to the upper classes become available on a lower- or middle-class budget.

However, many things actually get more expensive regardless of things like money supply.

For example, let’s look at cars. Once Henry Ford mastered the assembly line, he could sell Model T’s brand new for $300 in 1925. Using an inflation calculator, that equates to a mere $4357 and some change in today’s money.

But think about it: those Model Ts didn’t have many features beyond rudimentary turn signals and a steering wheel.

Contrast that with your average modern car that comes standard with tons of features 1920s America could never imagine.

All these modern features (not to mention the drastic increase in materials quality in cars since then) cost a lot more to make than a simple Model T in absolute terms; in other words, assuming we made both types of cars today and made them the same way, the modern car would require much more money to build due to all its features. 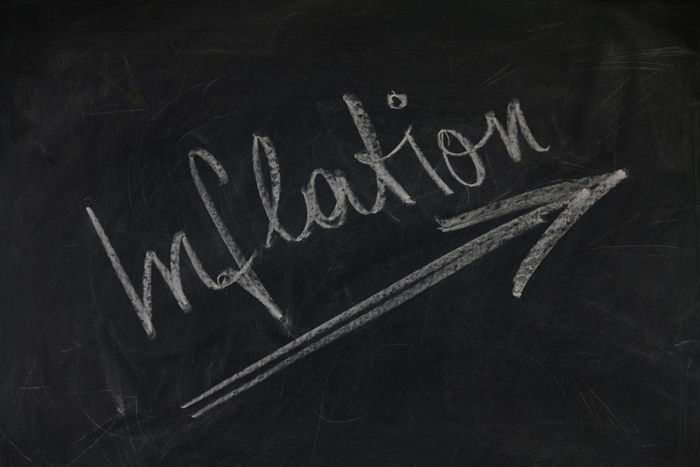 Economic inflation tends to have a negative connotation attached to it. This is probably because the average person doesn’t care about inflation until it starts hurting their wallet (which is totally fair).

However, inflation is actually beneficial for the entire economy when kept at sustainable levels because it encourages spending and investment; this leads to healthy economic growth.

I pay you for a product you have. You reinvest the money into your business by hiring a few employees to make your product, thus increasing your production.

Now that these people are employed and increasing your production, they have money they can spend on goods and services.

In other words, demand just increased.

In addition, since you needed these workers in order to increase production and keep the business going, these workers were able to negotiate higher wages from you.

They take these higher wages and spend  or invest it elsewhere, further increasing demand and growing the economy.

As demand increases, prices increase to remain at economic equilibrium. Thus, each dollar is worth less.

At the right speed, 3 things happen

If you think about it, wages are just the price of labor so it’s natural for the price to increase in an inflationary economy.

When kept at the right level, inflation is great for everyone.

What it boils down to is slowly increasing the amount of valuable resources available in an economy so that in theory, everyone wins:

“A rising tide lifts all boats”, as they say.

To keep the economy chugging along at the right speed, the central bank looks at a lot of complicated economic projections and estimates the amount of money they’ll need to inject into the economy to prevent anything from going out of whack.

Too fast, and you get hyperinflation like in 1920s Weimar Germany.

Too slow, and you could end up with deflation: money becomes more valuable and people hoard it, shrinking the economy as spending and investing decrease. Aggregate savings (savings across the whole economy) actually decrease as wages decrease, despite the value of money increasing.

Balancing inflation is the hard part; even the United States Federal Reserve gets it wrong sometimes.

It’s also important to note that in economies with no independent central bank, borrowing becomes much easier as your debt’s real value plus the interest decreases faster than you money’s value.

How Does The Fed Control Inflation?

The Fed has a few methods for controlling inflation.

When the Fed takes money out of the economy, the remaining money becomes more valuable as it’s more scarce.

Likewise, injecting money into the economy makes it less valuable.

The former would be used to slow down inflation and prevent the devaluation of money (and potential hyperinflation), while the latter would help kickstart a slow economy by encouraging spending.

Some ways to reduce the money supply include

The money ends up leaving circulation and arriving in the Fed’s hands.

Banks borrow from the Fed in order to lend to you; it follows that they would have to charge a rate higher than the Fed’s Federal Funds Rate in order to profit.

If they raise the Federal Funds Rate, banks raise their rates and therefore discourage borrowing. This slows down inflation if it’s too high.

If they lower the Federal Funds Rate, borrowing is now encouraged which can help a slow economy grow faster.

The Reserve Requirement is the amount the central bank requires other banks to keep in reserve. The higher the requirement, the more stingy banks are with their money; thus, borrowing becomes harder and inflation slows.

By lowering the requirement, banks will lend out more money to maximize their returns, increasing inflation.

The US Fed instead prefers to buy and sell government bonds as their primary means of implementing monetary policy.

Inflation’s Implications For You

Inflation affects you in several ways.

Get Your Money Out Of Your Mattress

Sticking your life’s savings under the mattress you sleep on might give you the peace of mind that the money’s safe from the banks, but that money rapidly loses value each day you sleep directly above it.

You won’t notice at first, but if you stockpile money under your mattress at the right rate over time, your ending amount could be worth the exact same as your beginning amount was worth all those years ago.

Basically, you wasted a ton of time stockpiling a bunch of paper without actually building your wealth.

Not to mention you’re all out of luck if your house burns down.

In a similar vein to the “money under a mattress” scenario, you need to find a way to keep up with inflation if you don’t want your money to become worthless.

However, not all investment vehicles are optimal for beating inflation.

For example, most savings accounts have interest rates far below the inflation rate. Some high-yield accounts might be able to beat inflation, but usually not by a lot.

Savings accounts are built more for emergencies and specific goals rather than maximizing investment returns.

Instead, you may need to seek out investments that’ll give you a nice return even above and beyond the inflation rate.

Something to speak to your financial advisor about.

As we said earlier, inflation influences the level of employment in an economy. In an ideal scenario, inflation would rise at exactly the rate necessary to employ an ever-growing population and pay them a wage they can enjoy life on.

However, predicting and accounting for inflation is a complicated task that even the Fed struggles with.

And so, part of the reason you may lose your job could be due to too slow of inflation. People hold on to their money, so companies have to cut their costs to compensate.

Usually, that means some employees getting a very unwelcome pink slip.

If you hear anything about inflation slowing down, it could be your cue to dust off that resume and start browsing some job boards.

Even your travel plans can be affected by inflation. Currencies all over the world regularly fluctuate in value; controlling for all other factors, a currency that’s inflating is losing value relative to other currencies.

If you play your cards right, though, the opposite could happen. A strong US dollar could get your much further in other countries.

Economist Adam Smith liked to talk about the “invisible hand” of self-interest and how it creates prosperity. People “selfishly” pursue profit by starting a business and selling a product.

Said product improves the lives of customers; with the customer money in hand, the business can now grow and employ more people.

But wait… doesn’t it sound a lot like inflation serves as the other “invisible hand” that contributes to prosperity?

Since inflation encourages you to spend your money, businesses have more incentive to pursue profits via your cash.

They hire more employees to increase their output and therefore profits, leading to the positive effects of properly-paced inflation we discussed earlier.

It seems that an economy needs both hands to function properly in order to be as healthy as possible.

What Is A Savings Account And When Should You Use One?

7 Tips For Investing In Your 30s - It's Never Too Late

What Is Term Life Insurance and Should You Have It?